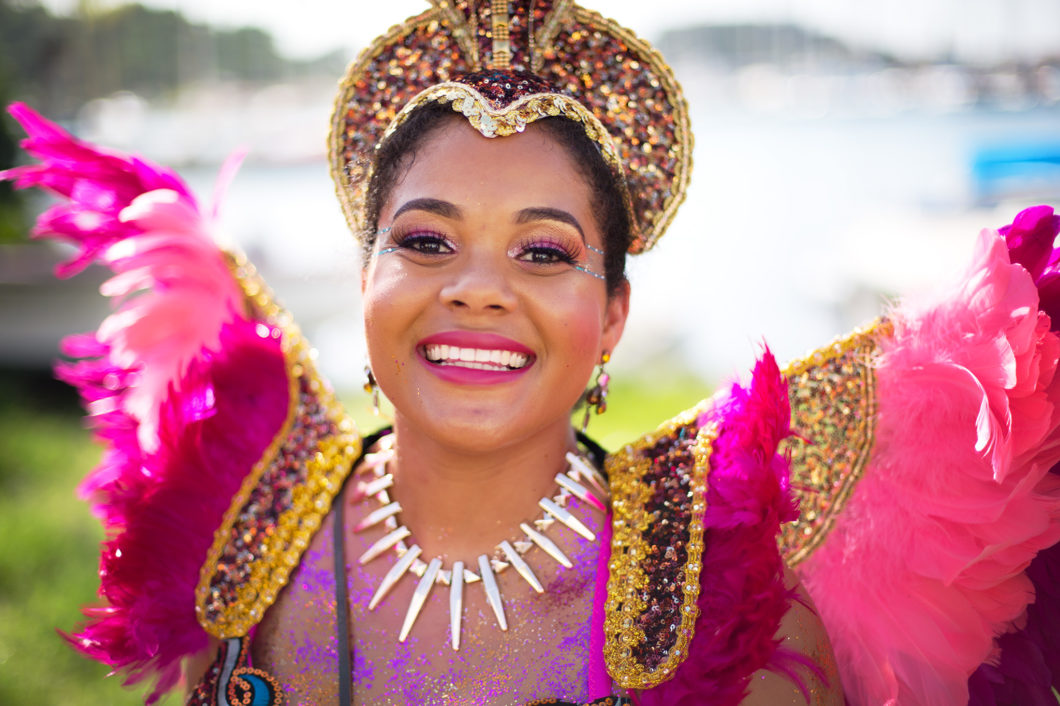 Once upon a time an ankle sprain threatened to stop the mas. But, in the wise words of many a masquerader, “mas must play!”

Grenada Carnival, better known as Spicemas, is the best time of the year. Held in August, Spicemas is the ultimate celebration of our people and our culture. Grenadian J’ouvert is renowned throughout the carnival world. Monday Night Mas is another element of the carnival product that sets Spicemas apart, but for me, the best part of my carnival is Pretty Mas.

So why Pretty Mas?

I truly love the performance and spectacle of the masquerade. I’ve been playing Pretty Mas with Commancheros & Associates for 14 years, and every year I get excited wondering what character I’m going to bring to life on the road. Pretty Mas is more than just shaking my (tail) feathers in a bikini and beads. It’s a grand show, and the spectators want to see me perform.


“This is the time we come alive…”

Based on the build up to Spicemas 2016, I was expecting another epic year. I loved most of the soca songs on the airwaves, and I couldn’t wait to see Razzmatazz, my section, come to life on the road.

*2016 was also not without the usual nonsense parading as music, but that’s for another day.

Spicemas week started on the Tuesday for my friends and me with my neighbours’ House Party Episode VII. My neighbours — C4 Promotions — host an outstanding fete every year. Of all the fetes on the calendar, I was looking forward to this one the most. Yes, maybe the fact that all I have to do is make sure to look both ways before I cross the road to go home is one of the reasons, but they do deliver a great product.

At any other time of year the thought of leaving a venue at 6:30am on a work day wouldn’t even cross my mind, but during carnival the concept of sleep is just a fantasy. I hadn’t been to Pree Day in a few years, but the headliners this year were the dynamic husband & wife soca duo Bunji Garlin and FayAnn Lyons, so I was sold.

Pree Day is basically Tallpree and friends in concert with a cast of almost 20 performers. Apart from some technical sound issues, it was a good show with a taste of nostalgia from artistes whose songs had long been forgotten but somehow were still able to move a crowd.

At around 4:00 am something didn’t seem right though, because there was no mention of the headline acts. 5:00 am, and still no indication that Bunji and FayAnn were going to be coming on stage. This was especially odd since the headliners usually perform with the rising sun. After 30 more minutes with no mention of the headline act, I headed to Twitter and Instagram. Whenever Bunji Garlin is in Grenada he tweets and/or posts to Instagram, but there was no sign that he or FayAnn were any where close to Grenada. We left the stadium at 6:15 am disappointed that we did not get to see Bunji and FayAnn perform, and annoyed that nothing was said about their failure to appear.

I understand that the promoters have to make difficult decisions about when and how to inform the paying audience about no-shows, but I would have liked to make my own decision on whether or not to stay in the stadium. Would I have left as soon as we found out Bunji and FayAnn weren’t going to be performing? No. Would I have still stayed until 6:15 am had I known? No, however at least that would have been my decision.

Thursday was my rest day, and Friday night was the usual Permit Fete at Aquarium.

In previous years, I’d usually spend Carnival Saturday recovering from Permit Fete and resting for the trip to St. Andrew for one of the huge you must wear white shows/concerts. This year though, one of the white shows —Xtreme White — was being held in town, in the national stadium. While heading to the country on Carnival Saturday might seem like tradition, I’m all for not having to make an hour and a half long drive back home at 10am after a night of partying. Also, Kes the Band was scheduled to perform at Xtreme White, so the decision really was not difficult.

*I have loved Kes the Band since the first time I saw them perform in the Bananas parking lot in 2007. There were only 50 people there, but it is still one of the best concerts I have ever attended.

After the Pree Day experience, I was slightly concerned about headline acts not arriving in Grenada to perform at their scheduled shows. So I stalked Kes the Band’s Twitter and Instagram to make sure that they were 1) on their way to Grenada, and 2) safely on island. They did both and, as usual, put on a fantastic show. Usually I would stay on the outskirts of the crowd, but for Kes I was as close to the stage as I could get so I could jump up with my people. As soon as they finished, I headed out of the crowd and into the covered stands for the rest of the show.

The “main” act of Xtreme White was Mavado, a Jamaican dancehall artiste, who, if I’m to be frank, did not belong in a concert on Carnival Saturday. I know there are many who will disagree with me, and say that in the spirit of Caribbean unity we should embrace everyone, and there are a lot of dancehall artistes singing soca now. But nothing Mavado performed remotely resembled soca. Added to that, his performance was lacklustre and without flow. His band literally stopped every time they played a new song (who does that?), and Mavado kept running off the stage. I was so confused.

The atmosphere in the stadium also changed. The crowd on the grounds seemed aggressive, and everyone around me in the stands looked bored. When Mavado finally finished, and Lavaman raced onto the stage, the spirit of Carnival returned to the stadium. Lavaman then brought on to the stage the Soca Monarch, Boyzie, and Groovy Monarch, Dash, and it was like the real show had resumed.

At about 7:15am, I figured it was a good time to leave so I could beat the traffic, except for one thing. I had my friend Tornia’s car keys but she was somewhere on the grounds, and not answering her phone. So it was while I was making my way to the field that it happened.

I stepped off a narrow step and twisted my ankle.

At first I thought that it was like all the times when I step badly and my ankle would hurt for a few seconds and after a few deep breaths it would be fine. Not this time. I managed to make my way back to Lucille and Shakira, my friends who were going home with me, but we still had to find Tornia.

We eventually did, and then the big question was whether or not I could drive home. Neither Lucille nor Shakira drive manual, and waiting for someone to make it through all that traffic to come get us was out of the question. I steeled myself and drove us home.

Once home, everything frozen – ice, green peas, spinach – went on my foot. My poor toes were so swollen, but at that stage all I could think about was being able to play mas. 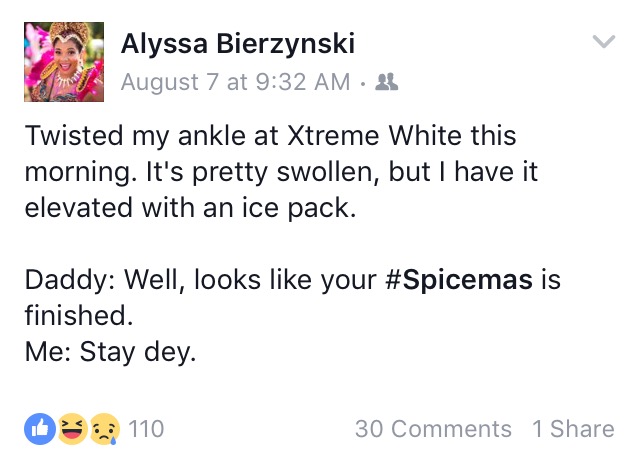 Good judgment prevailed and I spent Carnival Sunday on the couch. I looked at J’ouvert on TV (not the same), and skipped Monday Pretty Mas.  I did go to watch Monday Night Mas because I felt like I was missing too much. However there was no way I was going to miss Pretty Mas on Tuesday.

By Tuesday morning most of the swelling had subsided, leaving behind a nasty bruise. I couldn’t walk without limping.  But, I was determined to put on my costume and hit the road with my band. So, my darling Mummy drove me to get my makeup done, picked me up, dropped my Dad to meet his band, and then brought me down to meet my band. Bless her.

“Tell them the mas start, and we not leaving until it done…”

As much as I had been waiting all year for this moment, I wasn’t delusional. There was no way I would be able to dance in the streets and chip behind a music truck without further damage to my ankle. But mas must play! So, after taking the required number of selfies, I found a comfortable spot on the music truck. It wasn’t the Carnival Tuesday I had imagined but that’s what makes carnival so great. Mas is what you make it, and there’s no one way to play.

And that’s the story of how an ankle sprain tried, and failed, to stop the mas. Kudos for trying I guess (lol!).

It’s been 3 weeks since the injury and I’m still limping. My ankle is slowly getting better, but I have to remind myself to take it easy and not speed walk across campus. Several people asked if I was disappointed that I didn’t get my full carnival experience. I was, but I’m not worried. There’ll be more carnivals and more costumes. And when I’m old and grey, I hope to still be playing mas like this guy…

Take a look at the 2016 Spicemas Pretty Mas parade thanks to True Blue Bay Resort. Look out for me waving from the truck at 2:40!