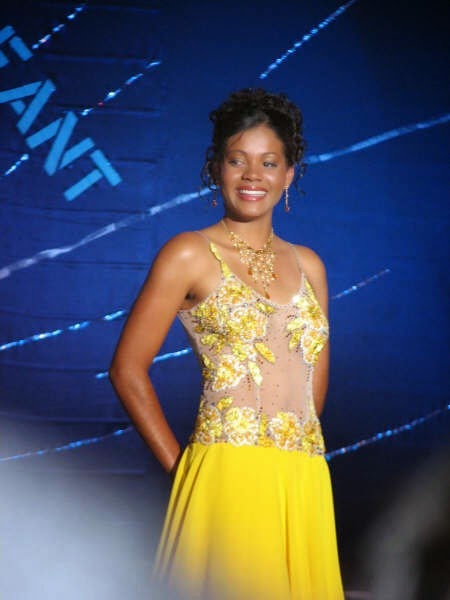 If you’ve been reading my blog for a while, then you’ve probably realized that I love food. I love going out to dinner, and trying new restaurants and new dishes. I love dessert even more. I live for a good food-venture!

You might have also noticed that my posts are usually quite light-hearted, and not that personal. Not this one. Here goes…

I went to my doctor this afternoon for my annual check-up. You know, just to make sure all the parts are working the way they should. She hadn’t seen me in a while, so during the examination she expressed concern that I had put on some weight. So I hopped up on to the scale… $%#!!!! I had never seen a number that high associated with my weight before. To be honest, I knew I had put on a few pounds, but I didn’t think it was that many. Sigh. The thought of having to lose weight made me remember a time that I wished I could forget.

Eight years ago, in 2007, I competed in the Miss Grenada World pageant for what was probably the best and worst experience of my life. The best because my confidence soared during the months leading up to the pageant. I mastered my walk in heels; figured out makeup; understood my strengths and used them to support my weaknesses. It was the worst experience of my life because I developed a disorder in my eating. The long, grueling hours of working out, followed by school and then pageant training, fueled by an incessant desire to look “good” in a bikini, did not turn out well for me. Especially during the final days leading to the pageant, I was probably only eating two “meals” a day. If you can recall that night on March 31st, 2007, you’ll remember that there were a few moments when I was not on stage with the other contestants. I had fainted backstage. It turned out that both my blood pressure and blood sugar were super low.

My life (and routine) returned to normal after the pageant, and I settled down for the last few weeks of the semester. Something didn’t though. I still wasn’t eating properly; I continued skipping meals. Even when I was hungry, I managed to convince myself that I wasn’t. When not eating wasn’t an option, I nibbled. I continued like this for almost the entire summer. I became lethargic and slept for most of the day. That’s how my sporadic eating patterns went unnoticed. Couldn’t eat while asleep. I remember feeling that I shouldn’t be eating, and when I did eat, I felt guilt. Even though the pageant was long gone, I still felt like I needed to maintain that body; but the body I had wasn’t good enough.

I wasn’t anorexic or bulimic, but something was definitely not right about what was going on. I know now that I suffered from disordered eating. I needed a literal slap back to reality (which I got), and I sought help to get back on track. It didn’t come without consequences though, and my stomach is still messed up. (Gastritis sucks, yo! )

So that brings me back to today.

I don’t know if this is strictly a Grenadian thing, or a Caribbean thing, but random people always feel the need to tell you that you’ve gotten fat. For example, the gardener at home and a groundsman at work have both greeted me with “you getting fat” and “you stop go gym?” Seriously, wtf? Other than me not having anything else to do when I first moved back home, that’s probably why I started working out. I was tired of people commenting on my weight.

Since that period in 2007, I never really discussed my issues with eating. If it came up, I glossed over it casually. Over the past eight years, even though I’ve managed to maintain “normal” eating habits, I still find myself fluctuating between extremes. I lost 20 pounds, then gained it back. Lost 15, and then gained back a little bit more. I get anxious when I start losing weight, and I start getting a little obsessed. When I lived in DC, I was so focused on counting calories and not exceeding my net allocation, that I forgot about nutrition.

When I moved back to Grenada and started working out, it wasn’t too long before I went overboard. As I got stronger I “forgot” about the chronic tendonitis in my knee and shoulder. As I got stronger I wanted to do more, even though my body couldn’t handle it. My shoulder still hasn’t recovered fully from the damage I did to it last summer. Sometimes I still feel like skipping meals, because I’m so aware of the weight I’ve gained. I don’t like how my thighs jiggle, or the little extra oomph on my tummy. I wish I could feel comfortable in one of those tight, body-con dresses, so I chastise myself about the slice of cake, or the scoop of ice-cream. I try really hard not to skip meals, because gastritis sucks and I don’t need more trips to hospital, but sometimes I give in.

I always wondered if and when I decided to speak about this, people would think I was just being dramatic, but disordered eating is real.

In doing the research for this post, I learned that this week – February 22 – 28 2015 – is National Eating Disorder Awareness Week. Without knowing it was Awareness Week, I had actually started thinking about my own experiences after reading an article I came across on Twitter. I couldn’t find the one I’d read, but this one – Disordered Eating Is Still a Disorder – is just as interesting. I’m happy to add my story to the narrative.

I want things to be different this time around. For health reasons, I have to lose some weight, but it won’t be because some rando said I got fat, or because I want to wear a tiny dress to impress some guy. I’m going to be normal.

Normal eating, according to Eating Disorders Victoria, is the “attitude a person holds in their relationship with food, rather than the type or amount of food they eat. It is normal to:

So, with my doctor’s help I’m going to come up with a plan that works for me and stick to it. I’m ready now.