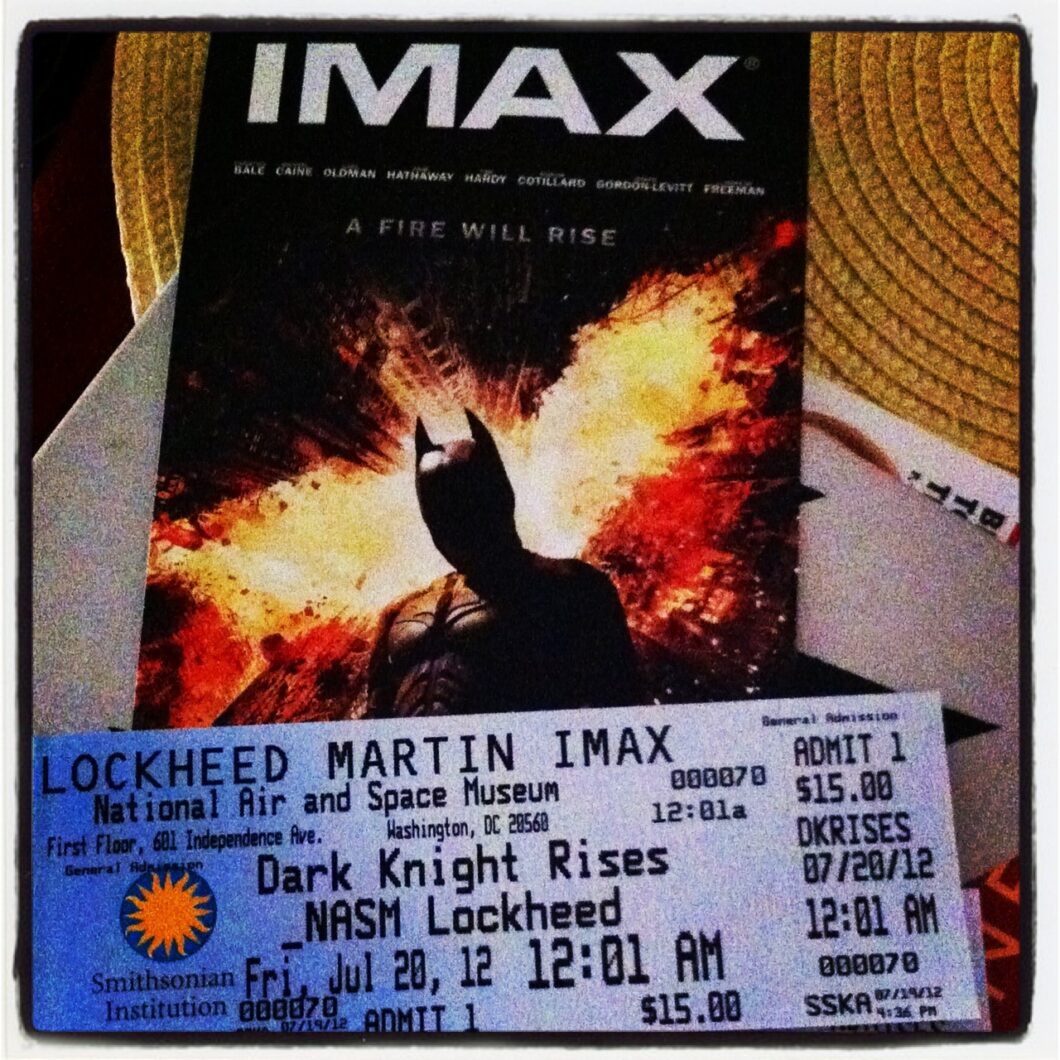 Dedicated to the victims, families and all affected by the tragic shooting in Aurora, Colorado.

I love going to the movies.

Ok, fine. I love going to the movies but I also fall asleep during them too. It’s probably easier for me to tell you the number of movies that I’ve managed to stay awake for. Sad, I know. But given my tendency to doze off 30 minutes in, it should come as no surprise that I had never been to a midnight premiere before last Thursday.

My brother had been preparing us for the premiere of Christopher Nolan’s final installment of his Batman trilogy months in advance of its release. We looked at the movies – Batman Begins and The Dark Knight – and the trailers for The Dark Night Rises (I’m sure we saw each trailer at least 5 times). I had never been the biggest Batman fan, but Andre’s excitement must’ve rubbed off on me. So when the tickets went on sale in June, I didn’t hesitate to buy a ticket for the midnight IMAX premiere at the National Air & Space Museum.

In the week leading up to the premiere, Andre got out all his Batman comics, graphic novels and books and gave me strict instructions that I had to read at least one of them. I chose Knightfall, which happened to be the same one that I had picked up to read a year ago but never got into it. It was a good read, and even though I didn’t finish it before the movie, I made sure to finish it the following day. 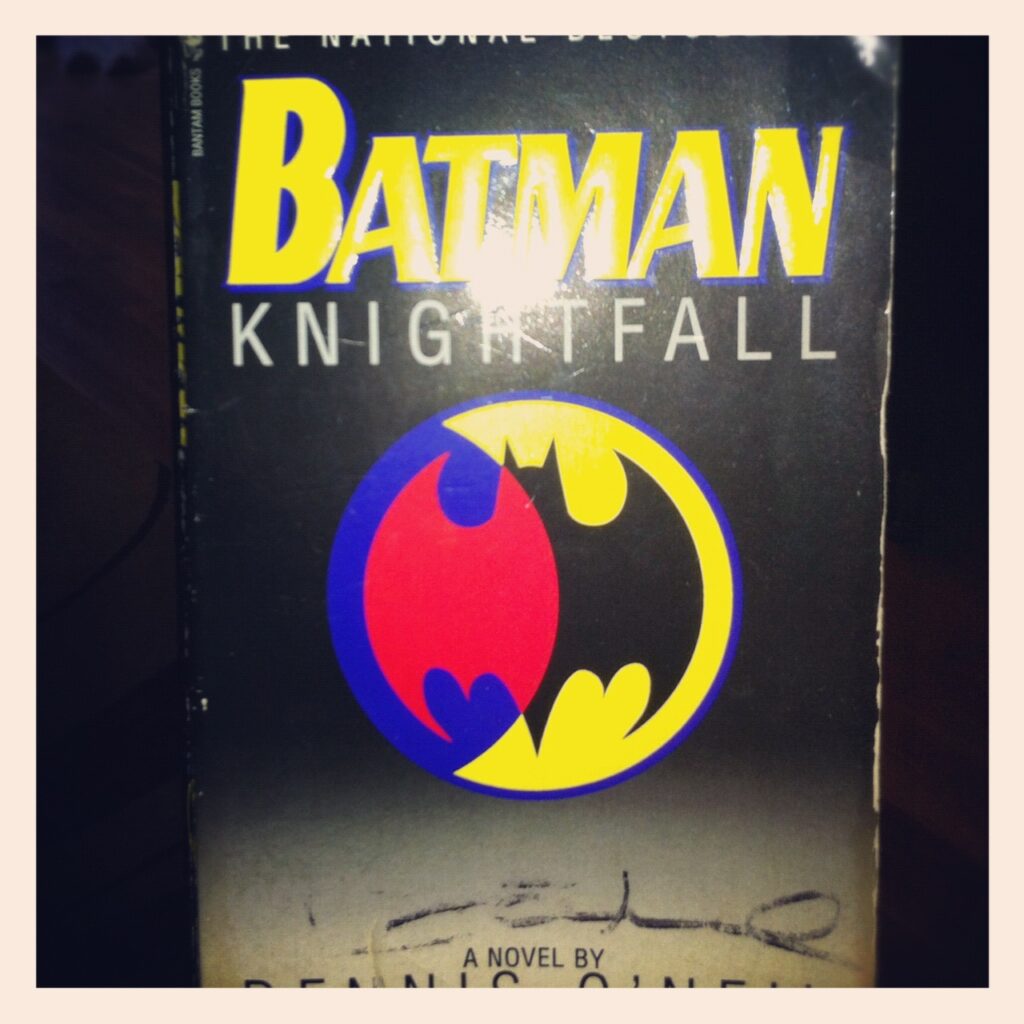 When Thursday 19th finally arrived, I was actually very excited. I stopped at the Air & Space Museum to pick up our tickets and went home to take a nap. As much as I wanted to see the movie, I couldn’t guarantee that I wouldn’t fall asleep during a movie that STARTED at midnight. 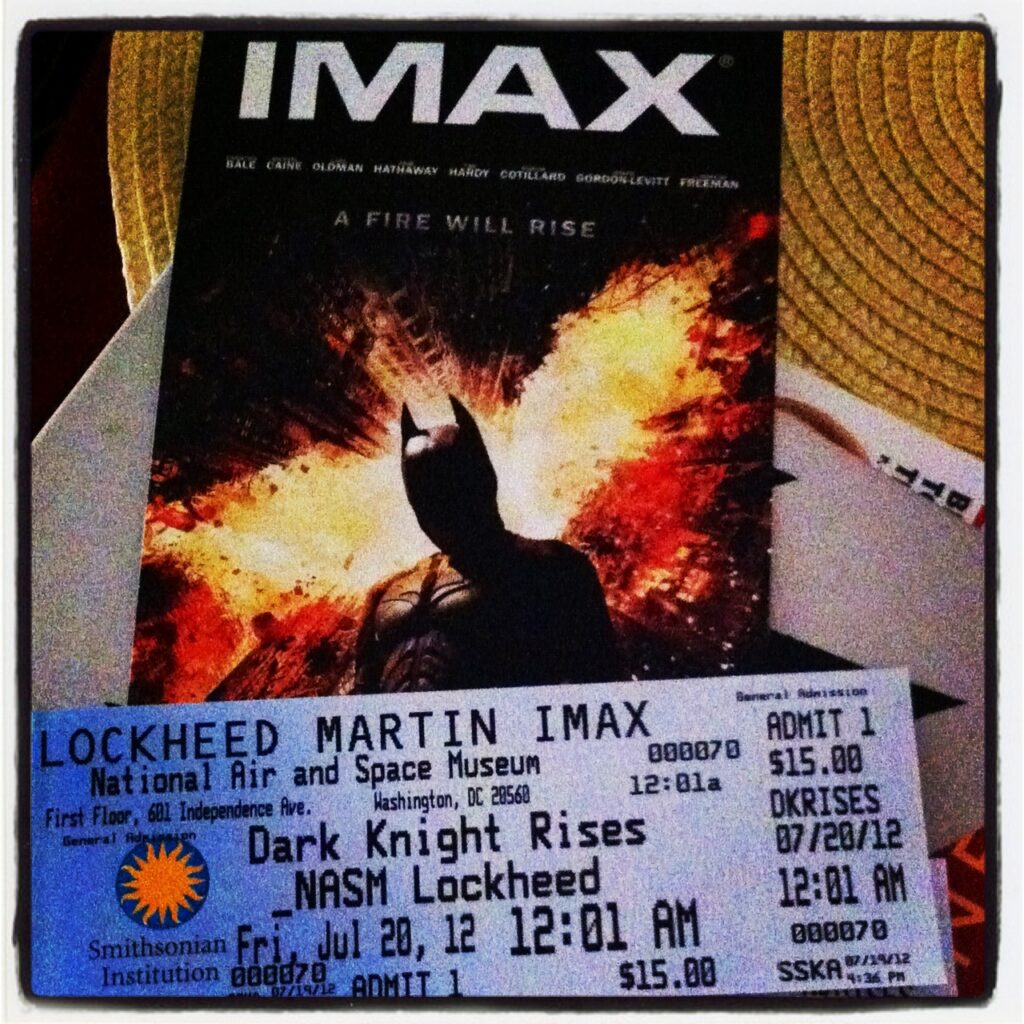 We left the house at 9pm and got to the museum and joined the line. Again, what is with this place and standing in lines? We struck up a few conversations with the people in line with us while we waited for an hour for the museum to open. It was hot and muggy and thunder rolled in the distance. As the lightning flashed, all I could think about was that I was standing outside by a pointy metal structure. Luckily, they let us into the museum just before the torrential downpour. 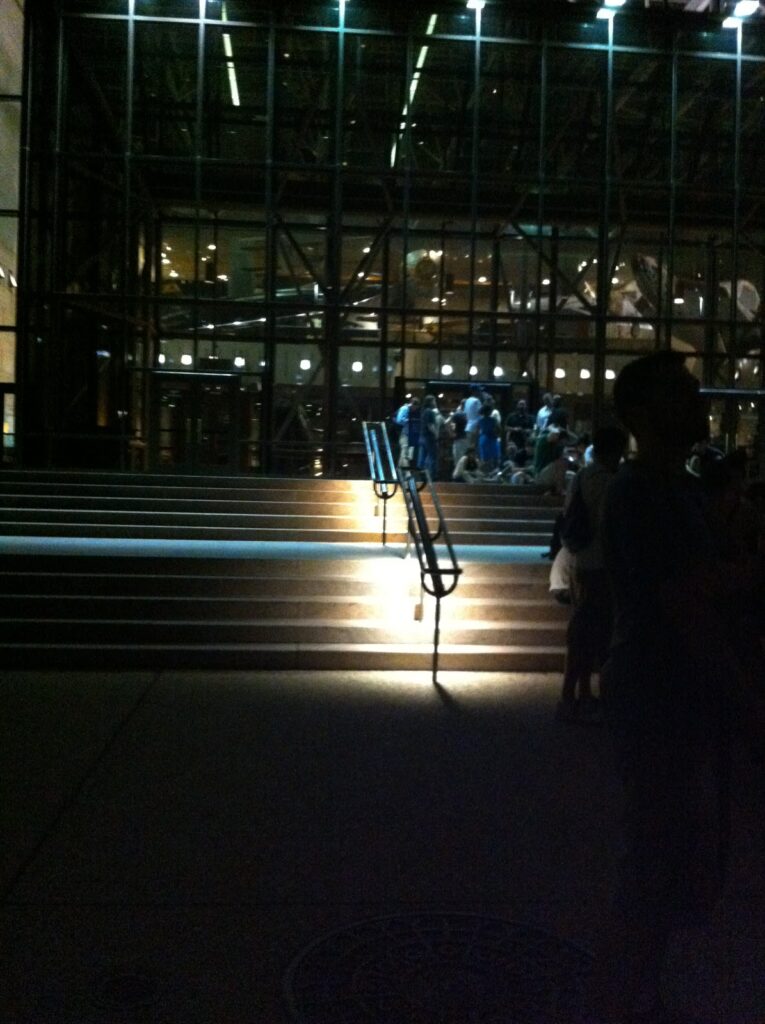 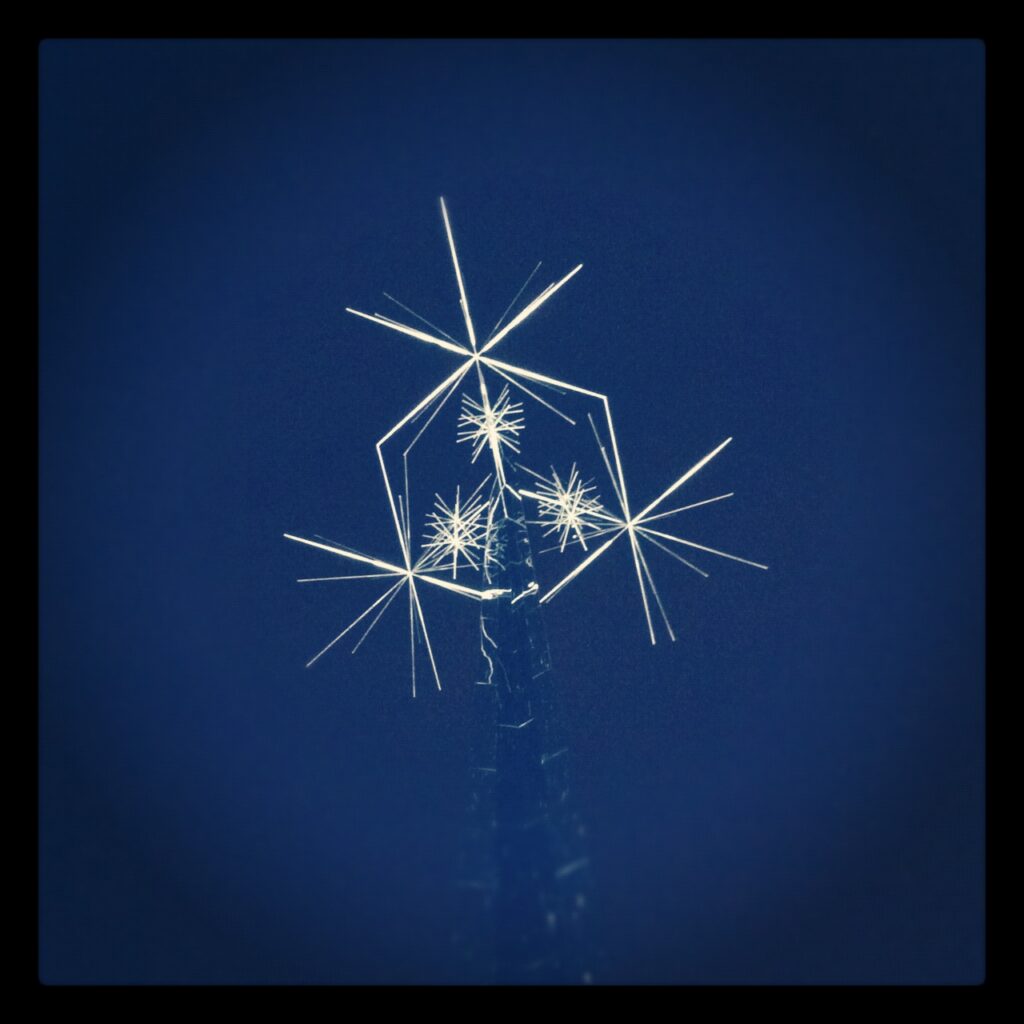 Now, on to the movie. The theatre was packed and even Catwoman and Bane were came out. Seriously, this guy had the creepy mask and biceps! Don’t worry, I’m not going to spoil the movie for those who haven’t seen The Dark Knight Rises yet, but what I will say is that I didn’t fall asleep. 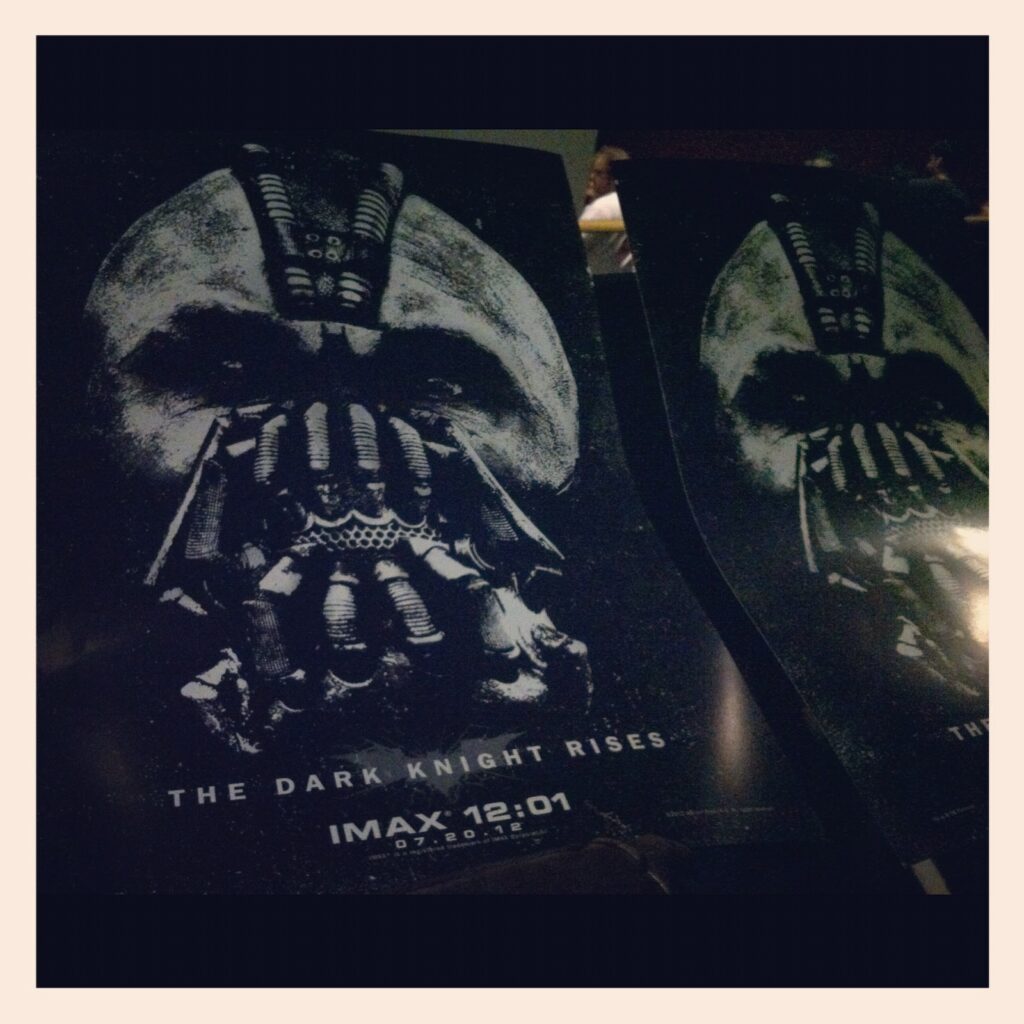